This month, PERA released its 2020 Comprehensive Annual Financial Report, also known as the “CAFR”. The CAFR provides a full summary of how PERA and its investments performed each year and the overall funded status of the pension plan. It is released every June.

Despite the tumultuous year, PERA’s rate of return for 2020 was 17.4%. This is significantly higher than the 7.25% assumed rate of return that PERA uses for its benchmarking and future planning.

Even with this high rate of return, employee and employer contributions rates will increase and retirees’ annual increase will drop again starting in July 2022. That’s because last November, PERA adjusted some of their main assumptions, namely that PERA participants are living longer than expect and the workforce has not increased as previously assumed. These changes have such an impact on the long-term costs of PERA that last year’s rate of 17.4% could not offset them. Therefore, the auto-adjust provision will get triggered to put PERA’s funded status back on track.

According to PERA’s CAFR, the number of years, or projected amortization period, that it will take until each division is fully funded increased from where it was in 2019. With the implementation of an auto-adjust provision, the amortization period improves as detailed in this chart. 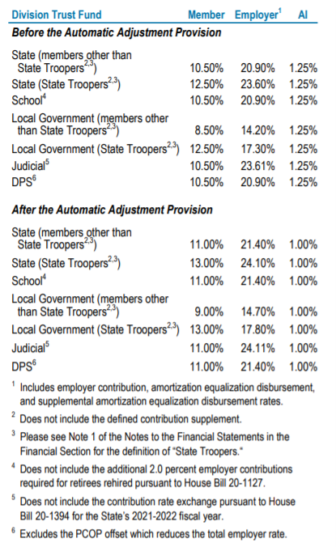 Starting in July 2022, employee and employer rates will increase by 0.5% and the annual increase for retirees will decrease by .25%. The following chart from PERA’s 2020 CAFR details the changes.

The continued auto-adjustments, particularly after two years of double-digit rates of returns, highlight the challenges that continue to face PERA – primarily past years of government underfunding the pension. The state legislature’s decision to not make its 2020 contribution of $225 million is the most recent example. PERA’s actuaries noted that the loss of this contribution meant a $990 million long-term loss to the pension overall due to not having the investment returns or compounding interests that the $225 million would have generated over time. The Colorado Sun covered the board meeting and issue here.